In this age of instant gratification, sculpting a David is really not something one would expect to do at the weekend in one’s garden shed. Despite this, classical sculpting is still a technique that has relevance in the digital age. There are several outstanding programs that are specifically designed for sculpting in 3D, and breathtaking cost aside, these have spawned a veritable army of sculptors whose creations span every imaginable genre, and then some.

Unlike the ancients, hours are not spent chipping away at lumps of virtual marble only to find a flaw in the middle of it, and I doubt that Michaelangelo or Donatello were able to press Ctrl-Z when they realised that they had forgotten to put some clothes on David. Sculptors now have tools no-one dreamed of even thirty years ago, and every material the human mind can conceive is at their finger-tips.

Despite all this almost sci-fi progress, there are still two key ingredients that have yet to be affected substantially: time and skill. The finest sculptures still require absolutely ages to sculpt, polish, texture, light and render (create a CGI “photograph”). The skill demanded is still quite daunting for the neophyte, and breathtaking for the art-lover.

This is why, when the occasional technique comes along to relieve the artist of the tedium that detailing an otherwise fun project is not simply welcomed, but greeted with open arms and almost infinite enthusiasm.

UV sculpting is one such technique. It essentially involves the use of very specialised images to displace geometry using image data as co-ordinate information. The geometry of this splendid lightsabre which is the subject of this post took all of 15 minutes to create. The material took approximately twenty minutes to fiddle with to get just so. The lighting and camera set-up took even longer. For greebling, this is truly a gift.

The lightsabre was created in Blender, a free and open source 3D program that is my tool of choice for all things 3D. It was rendered in Cycles, the splendid new engine from the Blender Foundation.

The Blenderartists thread that spawned all of this splendid effusion may be discovered here.

Click on the images below for in order to facilitate drooling over some splendid detail. 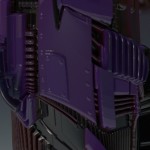 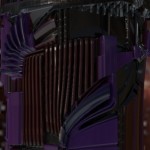 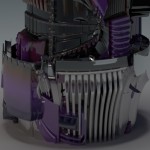 A few weeks ago, a friend of mine cut out an article from that august publication, the Jewish Chronicle, in which one Jennifer Lipman whines about the fact that we still have two days of Yom Tov, and that it was about time that sort of thing was abolished. Her arguments were the usual half-researched ignorance one simply expects from the kind of opinionators who espouse their fathomless wisdom regarding Yiddishkeit in the JC, and reveals a great deal about the sad state of Judaism in certain enclaves.

My good friend had provided me with this gem in the hope that I would pen (keyboard?) a suitable response. Well, I sort of did, and whisked it off via the ethers of the interwebs to the aforementioned publication in the vague hope they might publish it. Since my wife quite rightly does not allow that sort of material to enter the house now that soft toilet paper is relatively affordable, I have no idea if this eventually saw the light of day.

Below is a copy of my exposition for your edification exposed in a timely manner during the season of Good Latkes.

Through the lines of her sage prose, one can but empathize with the pain that Jennifer Lipman experiences as a result of observing her religious devotions (One day good, two days bad, 12 October 2012). At the end of the very first day of Yom Tov, she “has had enough”. Her work schedule is disrupted every year by festivals “non-Jews have never heard of”. What a hassle it is to walk on Shabbos when she has a perfectly serviceable Oyster card in her pocket.

Ironically, in very little time indeed she will be participating, one would imagine, in a Chanukah party. After answering Amen to the blessings recited prior to the Menorah lighting and then following that brief ceremony with prudent quantities of doughnuts and latkes, she and her fellow revellers might entertain themselves by singing all the old favourites such as “Maoz Tzur” and “Rocking around the Chanukah bush”.

Imagine, if you will, that at this very moment a bright flash from the middle of the room temporarily blinds the merry revellers. As they peer through the hands that they instinctively threw up to protect their vision, the party-goers are astonished to see that none other than Matisyahu (the Chanukah rabbi, not the rapper) has suddenly apparated into the midst of their celebration.

It takes a moment for both the apparator and apparatees to gain some semblance of equilibrium, but once that brief interval passes, the ancient rabbi looks around him in a disorientation born not of his sudden reanimation, but of the vision before him.

He enquires as to the nature of the people there, and Jennifer steps forward to explain that they are Jews commemorating Chanukah. Matisyahu appears confused, because he assumes that she is dancing with a group of goyishe boys, but she assures him that they are all Jewish, and expresses surprise that he did not notice their kippot.

Matisyahu points out that wearing a piece of cloth on one’s head does not make you Jewish, and that they look like goyim since they don’t have beards and peyot. They dress like goyim too, he observes. And talk like them.

Realizing that the state of Judaism is sadly deteriorating yet again, he throws up his arms and cries out for a revolution. He pleads with everyone and recounts how in his times, the situation was no different. The Hellenists looked exactly like these party-going young lads; shaven faces, no peyot, and they also put shmattes on their heads if they were gardening or sunbathing. The girls favoured fashion over tzniut, hedonism over modesty.

The ancient rabbi continues to recount that the modern and progressive Jews of his time worshipped at the Greek alters “sadly out of necessity”, in order to secure all the top jobs in their law or accountancy firms. They, too, dumped innumerable Rabbinic laws in order to bring their lifestyle into line with modern practice. The job market was difficult then, they knew they needed the edge, and so they decided to work on Shabbat as well.

“We need a revolution,” he cries, throwing his arms into the air and tilting his head back, like a prophet of yore. “Mi laShem elai! Whoever is for Hashem, come unto me!”

His eyes travel around the room expectantly, but it is clear that the young people standing there are torn in twain by indecision, and they are looking at the floor in discomfort and shame.

“What, like now?” enquires a young chubby-cheeked lawyer. “I’m all for it, but I have to be in court in a few hours, and I still haven’t prepared my brief!”

An obvious geek sporting a t-shirt with a Magen David printed in binary mumbles something about the Imax showing all of the Lord of the Rings trilogy back-to-back and how had he had spent hours packing his favourite pyjamas and all the survival gear that Lifehacker.com recommends for 11-hour movie stints and that the tickets were going for hundreds on ebay and he’ll never get another chance like this again.

A young lady mutters about a salon date with her mother that she simply cannot postpone and surely that’s a mitzvah?

One by one, each reveller stumbles through a hastily contrived imperative that prevents them from participating in their sacred duty. Matisyahu is visibly frustrated.

“Why are you celebrating Chanuka then?” he demands furiously of them, livid at their flaccid response. “Surely not because I and my sons overcame the Greeks? The only purpose in fighting those battles was to save the Torah; was to stop our Jews from going to the movies, eating Mars bars, and to prevent mixed dancing. Since clearly you are doing all that, you must be celebrating Diwali! Why the Menorah?”

Matisyahu waves his fist in the air, shouts out his call yet again: “Mi laShem elai! Whoever is for Hashem, come unto me!” He spins around and stomps out of the room, not waiting for a response.